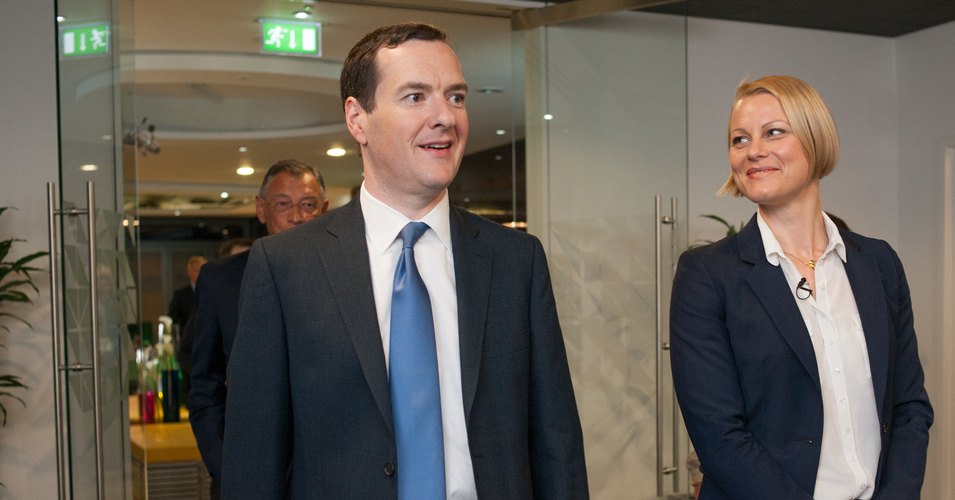 Chancellor of the Exchequer George Osborne made his way to Level39 yesterday for the launch of Innovate Finance.

Led by Deputy Head of Level39 Claire Cockerton, Innovate Finance is an industry body established to promote the interests of the fintech sector in the UK. The organisation will represent the views of both young, agile startups and established, international financial players.

Over 50 banks and young  startups have already signed up for membership of this new organisations – see below for the full list.

After the Chancellor met some young startups, including a BitCoin ATM, Claire Cockerton made her first speech as CEO of Innovate Fiance. Claire spoke spoke fluently and passionately about financial technology in the United Kingdom, and how Innovate Finance will help London cement its place as the undisputed fintech capital of the world.

“The time has come for radical transformation of the financial services industry. Whether you are a consumer, banker or young entrepreneur – we all see enormous potential for innovation and growth in the financial services sector… While London and the UK provide the right talent, expertise, and market conditions, we believe our collective entrepreneurial spirit will lead us to compete and prosper on a global stage.”

George Osborne gained the stage after Claire and set the twittersphere alight with a rousing speech on the UK’s global ambitions in fintech. Midway through the event, #InnovateFinance began to trend in London, and then become a top ten UK-wide trend.

“Key to the government’s long term economic plan is cementing Britain’s position as the centre of global finance.It’s only by harnessing innovations in finance, alongside our existing world class knowledge and skills in financial services, that we’ll ensure Britain’s financial sector continues to meet the diverse needs of businesses and consumers here and around the globe, and create the jobs and growth we all want to see in the future.”

Level39’s parent company The Canary Wharf Group plc is founding sponsor of Innovate Finance, with City of London Corporation assuming the role lead sponsor. Innovate Finance boasts a star-studded Board of Directors. In addition to Claire as the CEO, the directorship includes Nick Hungerford of Nutmeg, Justin Fitzpatrick of DueDil, and Alastair Lukies of Monitise – the latter of whom will serve as Non-Exec Chairman. An Advisory Council of industry experts will advise the organisation, including Head of Level39 Eric Van der Kleij, and Nadeem Shaikh of Anthemis Group.

The full list of members can be found here:

FinTech Takes on the VCs – An Innovate Finance event