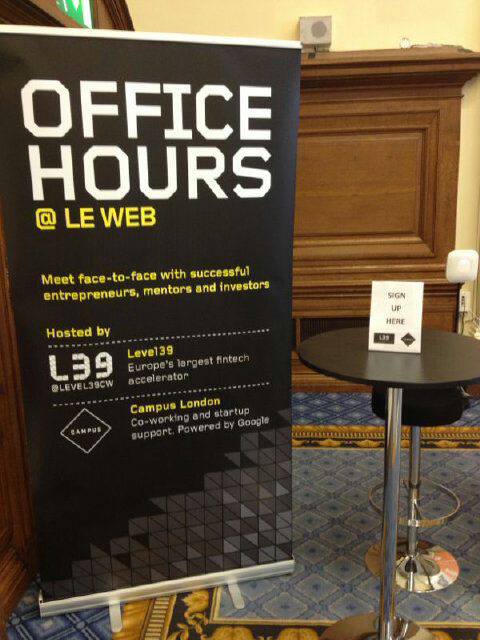 At Level39, we are very pleased to announce that we’re partnering with the good people of Campus London to run the ‘Office Hours’ zone at LeWeb 2013. Le Web is a two day phenomenon that brings the global tech community to London over the 5th and 6th of June.

The ‘Office Hours’ programme enables the tech startups who attending LeWeb to meet successful entrepreneurs, mentors and investors. Here at Level39, we’ve been working hard to secure a dream lineup of experts to chat to LeWeb’s attendees. These are people that can really help an entrepreneur shorten their route-to-market and improve their chances of gaining vital traction.

Attendees of LeWeb can book 15 minute slots with over 16 industry experts. Each of the mentors have signed up to provide at least four of these one-on-one sessions. That will mean that there will be over 60 session across the two days of LeWeb.

One of the mentors giving up his time to nurture the next generation of tech startups is Eric Van der Kleij, the Head of Level39. Eric’s mentoring sessions come soon after he officially opens LeWeb alongside Campus London’s Eze Vidra and Brent Hoberman of Made.com and LastMinute.com

It’s a real pleasure to be working so closely with Campus, too. Campus have established themselves as one of the hotspots of London’s tech scene and, here at Level39, we think of ourselves as part of Tech City in a big way.