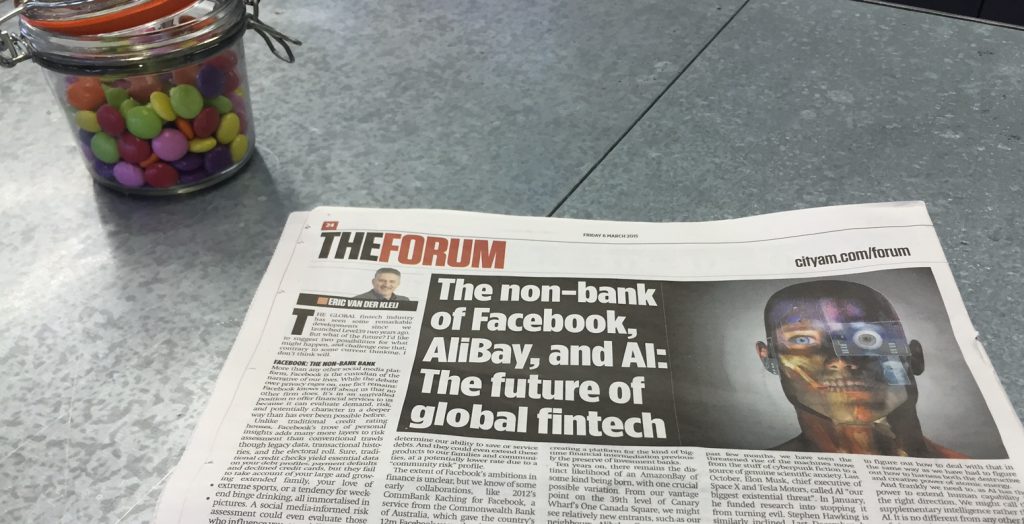 If you picked up CityAM on Friday 6th, or “Level39: Two Years On”, you will be able to read Eric Van der Kleij’s tech predictions.

In this piece, Eric shares his thoughts on Facebook and its potential to enter the financial services market, synergies between Alibaba and eBay, and a defence of artificial intelligence. However, Eric has some other thoughts too… see below for an unabridged version of Eric’s predictions.

A review of the past two years is as much about the future as it is about reflection. The question is not what just happened – we kind of know that, but what have we learned from what just happened, and how that can inform us about what is to come. Extrapolation of the game-changing continuum of global FinTech can yield a host of disruptive possibilities. I’d like to posit three potentials, and challenge one that, contrary to some current thinking, I don’t think will happen.

More than any other social media platform,  Facebook is the custodian of the narrative of our lives, our loves, and our legacy. While the ongoing debate on privacy rages and commentators grapple with policy imperatives through countless articles, one fact remains. Facebook knows stuff about us that no other company does. Ergo, they are in an unrivalled position to offer financial services products to us because they can evaluate demand, risk, and potentially character, in a richer, deeper way than has ever been possible previously.

Unlike the traditional credit rating houses, Facebook’s trove of personal insight adds many more layers to risk assessment than conventional trawls though legacy data, transactional histories, and the electoral roll. As such, it moves the process from a largely one-dimensional, numerical footing onto an altogether more behavioural and thematic dimension. Sure, traditional credit checks yield essential data on your debt profiles, payment defaults and declined credit cards, but they fail to take account of your large and growing extended family, your love of extreme sports, a high cholesterol diet or a tendency for weekend binge drinking, all immortalised in pictures.  But even more than this, a social media-informed risk assessment has the potential to evaluate those who influence you, especially those perceived “negative” influencers among your friends and family that shape your more risky behavioural traits.

Scary stuff? Sure, if poorly handled and either inadequately or overly regulated. But let’s consider the upsides. A key contributor to the financial crisis was the poor lending positions of mortgage companies. If those lenders had an additional signal, such as a simple traffic light system based on a rich, life-narrative based profile and only lent to the ‘greens’ and ‘ambers’, do you think that their mortgage-backed securities would have been more secure? My hunch is absolutely yes, especially if the ultimate, true value and risk of those “packaged” securities were made instantly transparent through remarkable innovations such as blockchain technology – but more on that later!

Major social media platforms like Facebook, Instagram, Twitter, Wechat,and even Whatsapp have the potential to offer financial services products in a way that is tailored to our specific needs and de-risked in a way that has previously not been possible. As these platforms can access such rich data, they could compute the lifetime value of a portfolio of financial products, informed by our spending patterns, by the week-to-week, year-by-year calendar of our disposable income and the behavioural traits that determine our ability to save or service our debts. And, they could even extend these products to our families and communities, at a potentially lower rate due to a ‘community risk’ profile.

The extent of Facebook’s ambitions in financial services is not clear, although we know of some early collaborations, like 2012’s CommBank Kaching for Facebook, a service from the Commonwealth Bank of Australia which gave the country’s 12 million Facebook users the opportunity to bank without leaving their social media platform. What’s clear is the phenomenal disruptive advantage Facebook would have if it chose to enter the sector fully. But I hope they apply their best minds to their approach, because their “trust quotient” is not too bad as a whole right now.  If handled well, and with beautiful transparency, a serious move into financial services could utterly delight their community.  Get it wrong and they risk losing the users who are not sure if they trust the platform completely, but like the benefits for the time being.

A decade ago Sean Park, author of the influential Park Paradigm blog, mooted the spawning of AmazonBay, a fictional global financial market exchange formed from the merger of Ebay and Amazon. Park, who went on to co-found Anthemis Group, the digital financial services investor and advisory company, saw the potential for a two trillion dollar organisation surpassing all others in scale and disruptive capability. AmazonBay, the world’s largest corporation by market capitalisation, was to be many things, acquiring lesser trading exchanges and virtual economies and creating a platform for the kind of big-time financial intermediation previously the preserve of the investment banks.

Ten years on from Park’s bold thesis, there remains the distinct likelihood of an AmazonBay of some kind being born, with I would suggest one crucial possible variation. From our vantage point on the 39th level of Canary Wharf’s One Canada Square, we might see relatively new entrants such as our new neighbours Alibaba Group stepping into their own megamerger with an Ebay or an Amazon. Alibaba wowed the market at IPO in September 2014, surpassing Facebook with a $230bn market capitalisation. If they combined their full might with, say, Ebay’s $60-billion-plus market cap, they could crank up their synergous e-commerce, online auction, money transfer and mobile commerce capabilities. In this fictional scenario, they could easily surpass the equally fictional AmazonBay as a disruptive global financial services behemoth. If fiction became truth, Alibay might just be the ultimate disruptor.

DAOs and DACs: a potential antidote to inefficiency and the unwelcome effects of greed.

This year, the Government asserted its ambition for the UK to become a world leader in driverless car technology. Self-driving cars started trials on UK roads in February, and we are now learning of the prospect of self-driving taxis. You’ve heard the pitch: remove human error and human irresponsibility from the business of motoring and you eradicate collisions and a good chunk of motor crime.

What if you could do the same with corporate governance and financial regulation?  If we agree that one of the biggest reasons for the financial crisis was the inefficiency or ineptness of humans, and indeed the inherent greed of some of them, then might the solution in some cases be to remove humans from the equation altogether?  Of course the other remedy would be a significant rise in ethical standards via something cumbersome like a doubling of the size of our regulators, but let’s stay with the FinTech angle for a moment;  Enter DAOs and DACs, Distributed Automated Organisations, and Distributed Automated Corporations. We are just at the beginning of what could be a pivotal era for this kind of entity, with some influential commentators becoming comfortable with the concept of DAOs, and the fact that they have no legal personality or capacity.  If I may park the huge regulatory and practical challenges for one moment, the potential of DACs is large and very tempting, as they would provide us with corporations that are without directors capable of human error, inefficiency, or corruption.

Indeed, the rapidly evolving development of ‘smart contracts’ is a clear demonstration that the technology exists for DAOs or DACs to function effectively. A reasonable example of what is possible is the way that Bitcoin miners implicitly understand that by contributing compute-power to verifying and storing transactions into a distributed public ledger, they are rewarded (paid) by the creation of Bitcoins. For all the challenges facing Bitcoin, the beguiling thing about this is how automatic and efficient it is, and how, despite the risk of collusion attacks, it is very hard it is to corrupt that system.  And that is what makes it so interesting: if we think about smart contracts being computer protocols that facilitate, verify, or enforce legal contracts or rights, they can easily emulate the logic of contractual clauses, with the capacity to make them self-executing or self-enforcing when certain conditions are met. Arguably, they can be more secure than traditional contract law. If you then combine the potentially incorruptible rigour of smart contracts with the transactional transparency enabled by blockchain technology, the possibility, and indeed benefits, of DACs starts to emerge. Blockchains bring a level of transparency and resilience to transactions that were previously opaque. And it isn’t necessarily Artificial Intelligence we should fear. Until AI reaches the point of criminal self-awareness, it’s hard to see a computer committing grand scale financial fraud or manipulating libor.

AI as enhancement not replacement

And so to AI. In the past few months we have seen the threatened rise of the machines move from the stuff of cyberpunk fiction to a source of genuine scientific anxiety. Last October, Elon Musk, CEO of Space X and Tesla Motors, called AI “our biggest existential threat”. In January he funded research into stopping it from turning evil. Stephen Hawking was similarly inclined. Last December he voiced fears that full artificial intelligence “could spell the end of the human race.”

Their assertions are as relevant to FinTech as they are to any other branch of artificial intelligence. AI already has many applications in the financial sector. Neural nets are combined into unique trading systems, genetic algorithms are used to manage stock portfolios. Financial institutions are using AI to enhance customer engagement or help reduce human error in transactions. As Standard Life was recently quoted, man has to deal with fear and greed, intellectual constraint and fatigue, whereas a machine is agnostic, tireless and has no bias in decision making.

Against this backdrop, and with all the humility I can muster, I would take a view that somewhat challenges Musk and Hawking, as they wave the red flag walking slowing in front of the AI-equivalent of the early locomotive. Enabling technologies have always posed inherent risks. Steam power, electricity and atomic energy needed to be harnessed before they could be put to safe, constructive use. It is true that Artificial Intelligence should be treated as a different case due to its capacity to learn, but we will have to figure out how to deal with that in the same way as we have had to figure out how to harness what is both the destructive and creative power of atomic energy. And frankly we need to, as it has the power to extend human capability in the right direction. We might call this supplementary intelligence rather than AI. It is no different from any other form of innovative human enhancement, from the glasses which let us see better, to the antibiotics that keep us healthy. At the IBM Bluemix Garage in Level39’s High Growth Space:42, engineers, developers and coders are collaborating with IBM to foster the next generation of cloud companies, including making Watson available to certain innovators. Elsewhere IBM is working with the Cleveland Clinic on a cloud-based pilot using its Watson cognitive computing technology to aid research into new cancer treatments. Bring it on!

This is just one example, but its point is simple. Just like fire, we should respect but not fear AI, because not recognising the potential to harness its power for good is not far short of neo-Luddism. Technology is a force for good, provided it is controlled, applied and embraced by its responsible human masters.

Bankable teams up with Moneyou on Banking-as-a-Service platform

Level39 member Token raises $15.7m in Series A round