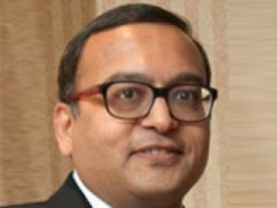 Birendra is an entrepreneurial banking and financial services CIO with work experience in US, UK and India. His expertise spans Capital Markets (Foreign Exchange, Fixed Income and Equities), Transaction Banking and Wealth Management with a particular focus on Digital and FinTech.

Until recently Birendra was CIO Commercial Banking at Lloyds where he successfully transformed IT for the Markets and Global Transaction Banking divisions. He has returned to the consulting practice he setup prior to joining Lloyds. Envision provides business development services to FinTech firms and strategic technology advisory services on diverse topics including digital transformation and resource strategy. This belies an extensive career in Investment, Commercial and Retail Banking IT.

In 2012, Birendra returned to the UK following three years in India as Managing Director and CIO at Nomura. This was a position he was well experienced for having played a key role in setting up the near shore centre in Belfast as part of Citi’s Global Resource Strategy. Birendra had a long and fruitful association with what ultimately became Citi. Starting with Salomon Brothers in New York in 1994, he went on to head Market Data Services and was then appointed to run Retail Wealth Management E-Commerce Technology. Birendra was further promoted to set the strategy for Citi’s award winning digital FX platforms in his capacity as Global Head of FX E-Commerce Technology from 2001-2004.

In April 2004 Birendra made the move to UK as CIO of Global FX Technology, soon followed, in 2006, with promotion to MD and CIO of Global Rates & Currencies. In 2007, he was appointed CIO, Global Fixed Income, Currencies and Commodities before joining Nomura in 2008.

Birendra is passionate about Fintech and is a Mentor at Level39. He was Co-Chair of REACH (Race, Ethnicity and Cultural Heritage) network at Lloyds. He is a keen Cricket fan and was on the Audit Committee for the International Cricket Council from 2008-2012.