Event Recap: The Future of Blockchain and Crypto: Where do we go from here? 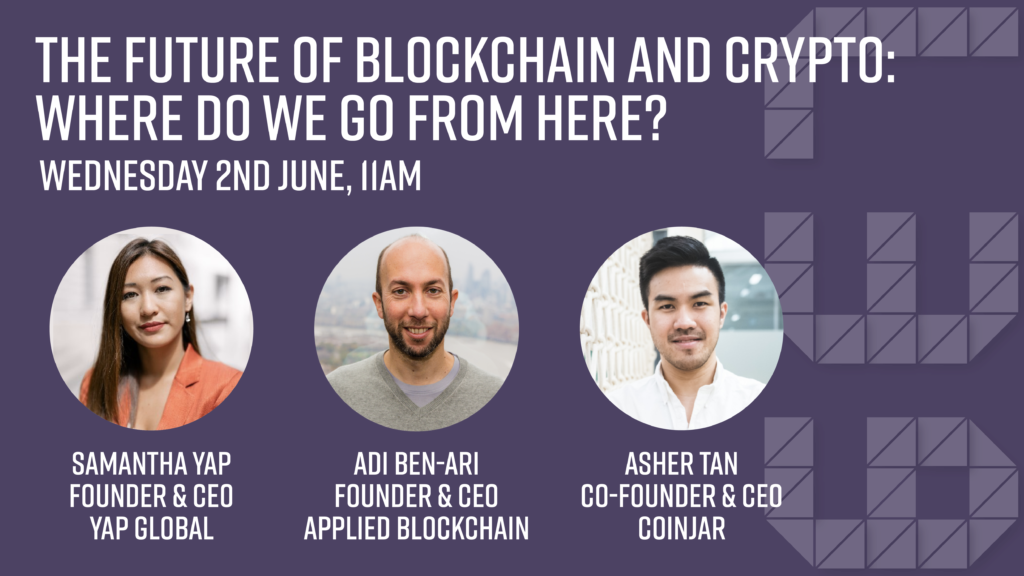 On Wednesday 2 June 2021, Level39 hosted the latest in its series of virtual events, The Future of Blockchain and Crypto, joined by three Level39 member CEO’s, all specialising in cryptocurrency and blockchain technology. The panel focused on where the future of digital currencies is heading and how we can differentiate the hype from the real-world benefits of these technologies and their progress.

In April this year, the price of bitcoin reached record levels but shortly came crashing down in May where the value was halved. This erratic inconsistency proves the uncertainty of the market and major implications it can cause. Given this uncertainty, will the hype continue? And could this really be a common currency in the near future?

“There are no real fundamentals behind crypto and bitcoin – we do not have forecasts like stocks do”. Instead, the market swings in cycles – a wave of irregularity. Over the past year, despite the major changes the world has seen, the narrative and core ideals of this technology (decentralizing and network strength) remain the same – resulting in renewing interest in this asset class.

What will the impact be of increased interest from retail investors?

“We saw a massive turnaround in business – there was a big interest in cryptocurrency and so lots of blockchain projects came to life.” Taking a more aggressive approach, Adi and his team worked hard to get more projects off the ground – creating valuable solutions, resulting in growth of funds which clients then invested further into growing their ecosystems.

“I think what has driven the price of the market is the institutional flows of money”. Sam explains that the influence of listed companies investing in Bitcoin and the power of the likes of Elon Musk and Tesla, has added to the surge in the flows of money and interest. “this bull market is different and wilder”.

Why has the success of cryptocurrency partnered with so much negative press?

“People don’t properly understand, and then skeptics come to play on the concern. This is still recent technology and people are not familiar”.  Yap explains that in the last six months, she and her team have focused on better educating the media and explaining different angles they need to take when reporting on cryptocurrency.

Adi talks about the “inevitable”. He believes that we may have a commonly used form of digital currency in the next five or ten years, though stresses the importance of regulation to inspire confidence in the idea. Adi points to the negative baggage that comes with the idea of cryptocurrency, such as money laundering and threats to the central banks, hence the result of negative press.

Crypto in a real-life setting – How is technology making it easier to invest in crypto outside of a professional setting?

Asher refers to accessible, free retail apps such as Trading212, who are integrating crypto into their service. “I don’t think it’s crypto-centric, but retail investors are looking to invest in this asset class”. Asher believes that whoever is delivering these consumer-focused services and platforms, have decided this is where consumer demand is, and as a result, this has opened the market for more avenues for people to easily invest.

Can more be done to ensure the crypto space is safe and people are correctly informed?

“Crypto has two sides to it – transparent whilst remaining anonymous”. Adi explain that there is an interplay between these two things and now that the tools are maturing, people feel safer.

Sam adds, “we are seeing growth of professional financial services that cater to crypto adoption”, driven by customers and clients. Crypto lenders such as Nexo and Celsius are examples of good interim companies for people wanting to participate in the crypto market through a trustworthy, professional financial firm.

How has mainstream media awareness about crypto changed recently?

“It’s been an interesting six months, but we have progressed from 2017”, says Sam, “We see more reporters paying more attention to crypto. For example, Bloomberg now have several reporters who cover crypto with their cross-market reporters regularly covering it and understanding it more. It’s progressed, thanks in part, to Elon musk, who created the hype”.

The presence of the art world, according to Adi, “cannot be ignored”. Christies auction recently had their third biggest sale in history of digital art. The sale went for 60M for a non-refundable digital token (NFT). It is said that the MDA has made money out of the digital collectables and as a result, Chrisities are now migrating to this platform. Celebrities such as Paris Hilton and other well-known DJs and artists, are releasing music in the form of NFTs. Sam adds that it’s inevitable that ‘celebrity endorsement’ will add to the hype and increased interest.

Regulations are not sufficient, making it difficult to distinguish between what’s real and what isn’t – “you get vast amounts of funds poured into things that don’t make any sense”. Adi advises those wishing to invest, to be careful and carry out adequate due diligence beforehand because there is a lot of “nonsense” in the space.

“Some fundamentals have changed, and more are accepting that this is a multi-coin reality. Not only are we in a reality which we have to deal with different types of blockchain and crypto but also NFTs and other ways of adding value and creating them.” Asher mentions that as a result, the media are more aggressive in sharing the message and influences a lot of people who may not have a technological mindset.

As we look to the future, will crypto solutions be used to improved financial wellness?

Asher strongly believes that it will but acknowledges that there will always be parallels to the gambling and gaming industries. He adds that there will be verticals for people building financial service infrastructures, and that it won’t be solely for entertainment.

Will regulations enhance or hinder the sector in the future?

“To some extent, the regulators have the power to kill this. This is what we are seeing in China and what has dampened the market”, states Adi, “But on the other hand, there’s so much innovation – so, they have to find the balancing act”.  As modern technologies emerge and existing one’s advance, everyone must mature with it, including the public, the media, the technology, and the regulators.

“Everyone says the regulators need to keep up but really they need to shift their perspective”. Sam refers to the Governments in China and India who try to ban the cryptocurrencies. “You can’t ban something that’s open”.

Whilst regulators can appear as barriers, they also provide a lot of aid. Adi mentions that without controls, a lot of negative things can happen on the internet. Regulations are imperative to the infrastructure, but it is how they are applied that matters.

Asher talks about his unusual experience with being regulated in the UK, explaining that the FCA facilitated regulation extensions due to the pandemic and understaffing. He goes onto say that he thinks the FCA is pragmatic, but with the challenges of a “bull run” and a massive surge of interest, he questions is the best way to deal with this?

What innovation in the crypto space would you like to see next?

Sam hope to see an increase in decentralised autonomous organisations across the world. Meaning, that they can run 24/7 and not shut down due to crashing of the market. Furthermore, Sam expresses her wishes for ‘decentralised finance’ to become more of an understood term in the media.

Adi would like to see more conversions in terms of platforms. “The beauty of what we have seen in the last year, is the liquidity and efficiency that comes with these things being on the same platform – the Defis and the NFTs all being in the same place”. Adi lastly mentions that on the regulatory side, it would be good for people to have more comfort in using these new technologies in open forms, safely.

What will the crypto space look like in ten years?

“Bitcoin and crypto have always been quite tribalistic”. Asher believes there are some things worth more than money – and that there will be push and pull between regulators, corporations and users. “Every self-interested group needs to push for what their community stands for”. He thinks the space will look “more contentious if anything”.

Adi thinks that there will be much less DeFi due to a lot of dropping-off from current projects and initiatives. “The big survivors will be Google and Amazon in ten years, but to get maximum value, crypto to be more widely used”. Adi believes that the financial institutions must merge and for the tech to go mainstream, there needs to be a combination of the two worlds.

The session finished off with a virtual Q&A with attendees including personal opinions of NFTs, whether blockchain will survive the pressures of regulators, the risk of poor understanding of crypto, and even the potential for satellites to be used to mine crypto!