Getting Ahead of the Trend:What Are the Next Big Things in Fintech 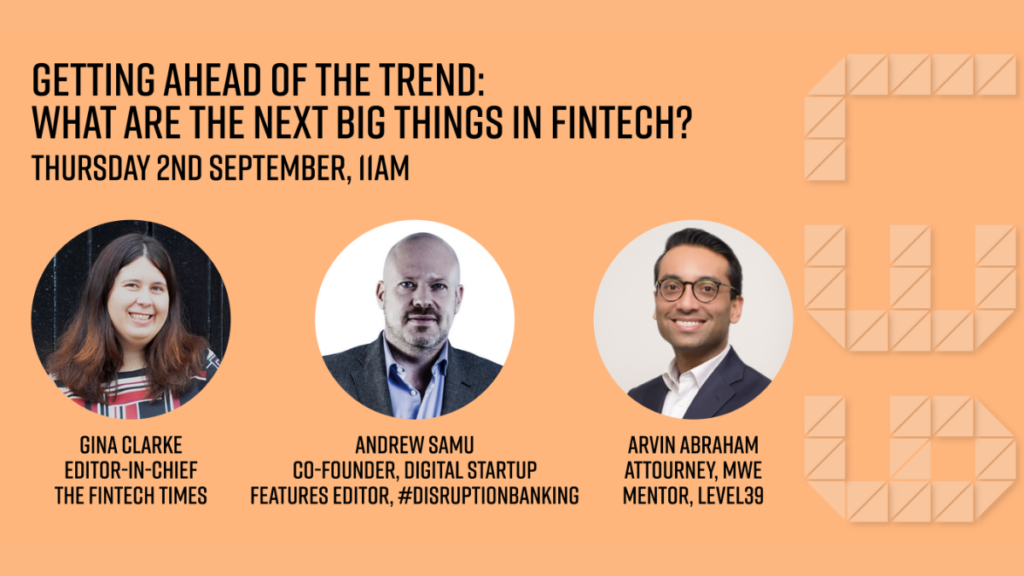 Level39 held a virtual event on ‘Getting Ahead of the Trends: What Are the Next Big Things in Fintech?’.

Adoption of fintech services by consumers has been dramatically on the rise. In 2015, only 16% of consumers actively used fintech services, but by 2019, 64% were engaging directly with fintech products, with a staggering 96% of consumers aware of fintech alternatives to traditional payments and banking. Meanwhile, Investment in UK fintech has reached an all-time high, as firms in the industry attracted an astounding $24.5bn in the first half of 2021. For both consumers and investors, the big question is, “what’s next?” – What are the emerging trends in Fintech and how can we get ahead?

Five Key Take-Aways and Emerging FinTech Trends, as shared by our panelists

Embedding the latest advanced technology, neo banks such as Revolut and Monzo meet modern consumer needs, compared to traditional banks who often struggle to compete with user-experience due to pre-existing processes. However, there is a notable push from neo banks who are forcing traditional banks to adopt new, innovative ways of working to keep up. For many, this presents itself in the form of partnerships and/or acquisitions of fintech companies. From a geopolitical perspective, some countries have adopted this better than others, for example, Asia is currently leading the way by teaming up trad banks with fintech’s. WeBank is one of the hottest and most widely used neo banks in Asia, providing affordable, accessible, and sustainable banking services digitally. In Europe, specifically in Sweden, for example, we see traditional banks setting up ‘innovation arms’ because they need to target a specific audience with a new product, especially with the effect of the pandemic which changed consumer demands.  Payment Services Directive Two (PSD2), a piece of legislation designed to force providers of payment services to improve customer authentication processes, is helping third party applications get approved by the FCA, allowing more scope for traditional banks to do more. We are seeing an open channel for fintech’s to work with banks through using their API’s and artificial intelligence to improve online banking services such as chatbot experiences.

The big question is, whilst partnerships and acquisitions are surfacing, do fintech’s still pose as a threat? Are they partnering or are they competing? Sceptics suggest that big techs such as Apple and Google may encroach onto the financial sectors ‘turf.’ With the expansive amount of data that big techs hold, they are well equipped to potentially enter this market with prominence and pose as a big threat to traditional finance.

The inflated hype around cryptocurrency is still present, with the younger demographic investing more. With the availability of Robinhood and other commission-free trading apps, it is becoming more accessible and affordable for everyone and anyone to invest. The Crypto market is now worth two trillion pounds with last year being the most successful year to date. However, there are several gaps in the fintech ecosystem when it comes to regulation. Crypto is a huge case and point where the UK has a policy statement and federations such as the FCA regulating crypto assets. Europe has a proposed new regulation in the market for crypto assets which will be live in the next year or two. However, areas remain of non-regulated crypto such as fractional shares and knowing who has access – this can be a danger to consumers whilst also being portrayed as freeing and libertarian.

Tokenisation as a fintech trend is not new but has demonstrated its worth by staying relevant and attractive to investors. In layman’s terms, Tokenisation is the conversion of things which were previously illiquid into a digital token holding a specific value or worth. We are now seeing tokenisation advance in the gaming industry, enabling internal purchasing in games. There is a whole marketplace dedicated to buying and selling the things we might take for granted when playing a game. Whilst many doubted the staying power of tokenisation, we are starting to see it maintain its position in the landscape. Tokenisation in fintech will continue to expand with both fintech’s and traditional banks integrating tokens for the protection of confidential data. Other types of data being tokenised include data utility tokens, NFT’s and data basket tokens. When efficiently leveraged, tokenisation of data into a tangible asset is beneficial for security, privacy, democratisation, monetisation, decentralisation and transparency.

Perspectives on ESG are shifting and it has now become an emerging trend prioritised for both the new demographic and investors. Investing decisions are becoming increasingly more focused on ESG contributions which, in turn, hold a lower risk and often gain a higher return. The younger generation, who are fundamentally more ethically minded, are making decisions based on societal issues which are important to them. For example, it is much easier to invest in PLUM’s ESG scheme rather than go into a trad bank and have a sit-down meeting with a financial advisor to decide where you will put your wealth in the bank. These types of robo-saving and micro investing integration apps are much more well known in the fintech space rather than the banking space. What is the expected longevity of people’s concerns for ESG? Is this a trend which is here to stay? Last year, Mark Carney said, “the crisis of our time is credit, climate and covid.” When considering the buying and selling of bonds, will countries with a heavy carbon footprint have problems selling? It is possibly too soon to predict this landscape, but what we do know is climate change is real and is influencing how fintech operates.

Central Bank Digital Currency (CBDC) is a blockchain-based virtual currency issued by central banks, however it is important not to get this confused with cryptocurrencies. CBDC’s as a trend are gaining momentum and are expected to have a significant impact and potentially disrupt the finance space by allowing central banks to keep currencies relevant in this digital age. There is room for a big shift in the global marketplace when it comes to how finance operates once CBDC’s become more mainstream. According to a report by JP Morgan, 86% of world banks are exploring their own digital currencies. Defi is undeniably shaking up the finance sector right now, whilst still in its infancy, there are still many discussions to be had about what this will look like and how banks will utilise it without too much disruption caused by innovative fintechs, who will be offering attractive and convenient alternatives. There is a whole host of possibilities with CBDC, but will traditional banks get one step ahead and lead on this to take it the distance?