Welcome to the world's most connected tech community
People Behind The Future: Albert Patrashku

People Behind The Future: Albert Patrashku

Albert Patrashku is a London-based designer and former music prodigy from Moldova. He attended music school from the age of six, playing the saxophone. “Music teaches you a different way of thinking – to see beauty in what is hidden, to draw parallels, break down complexity, and derive inspiration from detail.”

In university, he earned a degree for musical conducting. “Conducting taught me teamwork. In choir, there is no place for ego. Balanced teamwork is essential for a unified and smooth performance.”

After four years of conducting, Albert realised he wanted to explore a different life. At the age of 21, he moved to Moscow and got a job as a security officer in a bank. As a hobby, Albert did small design work for friends. “I installed software on my work computer to do it. I was eventually fired from the bank, but realised that I want to turn my hobby into a career.”

Albert took design from a self-taught skill to working with the most prestigious design teams in Moscow, eventually becoming head of mobile design at Grape. During this time, the advertising agency won a number of top awards nationally and globally.

This achievement did not stop Albert’s progression. “A friend of a friend mentioned that a London-based start-up needed help to design a new product. The company was starting from scratch, and the team was enthusiastic and ambitious. I got involved and was invited to move to London.” 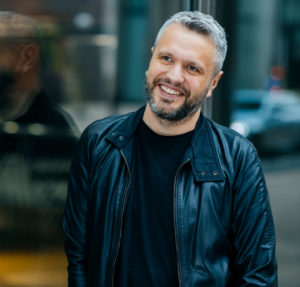 The move was a challenge: “Somebody once told me ‘change is the one constant in life’. That stuck with me because I realised that I have to embrace and make the most of it.”

Six years on, Albert is head of design at that same start-up, ClauseMatch. It’s now a Series A-promising regtech company, with large financial firm clients including Barclays. Its design and development is done out of St. Petersburg. “I find myself in a very interesting position,” Albert says. “On one hand, I have clients and users – London and European based financial institutions. On the other, I manage a design team in Russia. Those are two different worlds and cultures. I enjoy mixing and incorporating what I learn from both sides into my work.”

Music continues to inspire Albert’s design work. Having become a parent, Albert is also passionate about education. “Human development starts from education. I see my children go to school and the impact every aspect of their education makes on them as individual personalities.”