Welcome to the world's most connected tech community
People Behind The Future: Nadia Siddiqui

People Behind The Future: Nadia Siddiqui

How did a young female designer from Madeira, one of Portugal’s smallest islands, find herself in the midst of London’s thriving – and male-dominated – artificial intelligence scene? It’s a question Nadia Siddiqui, UX designer at customer service automation platform DigitalGenius, used to ask herself every day:

“I initially thought it was just luck that got me to where I am now, but after a while I got used to it, and found the confidence I needed to know I was worthy of my place.”

It took time to develop this attitude, despite the support of colleagues, often finding it hard to speak up as the only woman in the company: “It’s difficult; you’re always questioning yourself, asking ‘am I doing the right thing?’ The key is not being afraid to ask questions, which was especially important for me, because I needed to understand the product, despite not having the tech-savviness of my colleagues.” 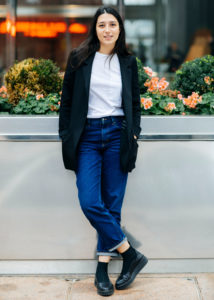 Launched in 2013, DigitalGenius ‘puts customer support on autopilot’ with its conversational AI. While the technology side of the company has grown, Nadia remains the sole designer and constantly develops the platform to keep up.

“I can’t spend a long time making something because otherwise, by the time I’m done, the technology will have moved on and I need to innovate again. It’s never boring, that’s for sure!”

Despite admitting she fell into the industry, Nadia believes she has found her calling. “I’ve realised that I do want to work in tech. Technology is virtually omnipresent in our lives already, so imagine where it will be in 10, 50, 200 years’ time!” she says. “But we need to get more women at the forefront, bringing much-needed diversity that will drive the industry in the right direction.”

She adds that London, with collaborative organisations like Level39 at the centre, are ideal environments for this diversity to thrive: “London is such a melting pot of different cultures . Level39 uses that collaborative attitude and nurtures the talent, making it a great place for anyone to start-up.”

Will Nadia be starting up herself anytime soon? “One day I would love to have my own business, perhaps that fuses fashion design and artificial intelligence. Watch this space, you’ll remember my name!”