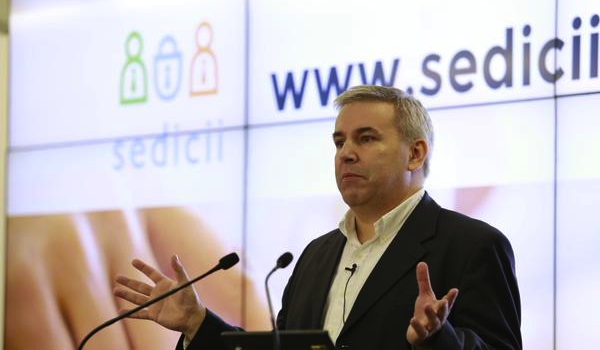 Data privacy startup Sedicii have been crowned victorious at the first ever EY Startup Challenge.

The Sedicii team beat of stiff competition from six other finalist companies, including Level39 member Yambina.

During their pitch at the grand final, which was hosted at Level39, Founder and CEO Rob Leslie explained that Sedicii’s technology reduces the likelihood of fraud resulting from identity theft.

Sedicii’s tech eliminates the need to transmit, store and expose a person’s private data during the identity verification process. Instead of sharing the private data – which includes a certain element of risk – Sedicii’s system of ‘isomorphic graphs’ ensure that data cannot be decrypted or hacked without a massive computational effort.

The six week challenge was hosted at Level39’s High Growth Space on 42nd floor, and Rob also very kind about our space here. In his own words “As soon as I saw the iPad coffee machine, I knew that Level39 was a special space.”

Head of Level39 Eric Van der Kleij was quick to congratulate Rob and the Sedicii team,

“EY’s ‘Startup Challenge’ is a great example of how a large, established organisation can share its expertise with young technology companies, whilst bringing some of its largest global clients to work alongside innovators to hone their solutions.

“All of the participating challenge finalists have developed and enhanced solutions that help large organisations tackle the increasingly critical issues surrounding data privacy that affect just about every kind of business. We are thrilled that EY’s first Startup Challenge has yielded such positive results. Many congratulations to Sedicii from all of us at Level39.”

Congratulations to Sedicii from the Level39 team.