The #RegTech Briefing at Level39 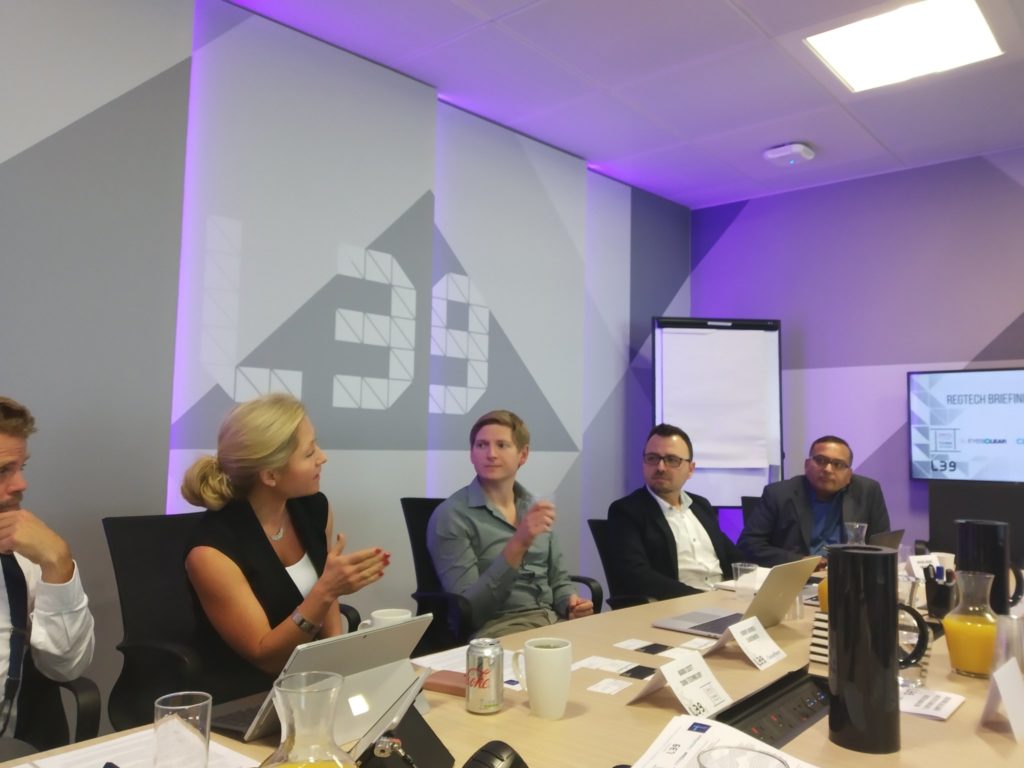 To bring their views to a wider audience – we invited senior journalists from Quartz, The Banker, S&P Global Market Intelligence and more to a roundtable with RegTech members based at Level39.

The conversation covered three main topics: culture, technology and politics. Beginning with culture, the entrepreneurs mentioned the different approaches financial institutions have towards procurement. Some FIs have shown great willingness to engage, while others have been more reluctant.

“Risk aversion cannot be overcome with strong technology behind it. Fundamentally incentives have to change.”

But attitudes are changing – as millennials are now moving into the senior positions of banks and making the procurement and innovation decisions.

“People high up in banks are not happy with the status quo and are actively looking for innovation now.”

Conversation moved to the regulator – especially our superstar regulator, the FCA, and how they are working with emerging tech companies.

“The FCA is tracking culture, too. Many treaties from the FCA encourage innovative, positive culture. Banks which take these steps will be in a better standing.”

“There’s benefits to automation, transparency, accountability and speed. There can be no excuses – regulators want these benefits”

When the conversation turned to technology – the group were quick to delineate the differences between the US and UK ecosystem – noting the more risk-taking nature of America’s startup ecosystem.

It was highlighted the higher barrier to entry to launch a business in Germany and France – and the more open attitude of institutions based in North America.

In terms of new entrants into the market – this RegTech briefing had a somewhat mixed attitude towards the potential of established technology companies moving into the finance sector.

“Buying out start-ups hinders them from becoming competitors. [Large tech companies] would implement their own culture onto their culture.”

Lastly – as the conversation turned towards politics, the group were keen to address the decision made for the UK to leave the European Union. Specifically, how the rise of RegTech creates a significant opportunity in addressing domestic political uncertainty.

“For RegTech companies, its good news, the more complexity that arises – the more need there is for us.”

Entrepreneurs at Level39 are, on the whole, positive about the UK’s prospect post-European Union. One member said:

“Britain will remain a financial centre, we have respect and trust for FCA, the ecosystem is strong and thriving. Challenges will be overcome.”

Talent was also a major point of discussion in the group. Entrepreneurs vocalised a concern about the availability of high-quality talent from overseas and the challenges of bringing them to London.

“We are bringing the best talent to the UK, even if this becomes harder. “

“Investing in graduates is good as they are flexible and brilliant – it pays off. There’s great universities across the UK and the government is investing into them. This will drive tech companies to get more involved with graduates.”

To find out more about Level39’s RegTech community and the rest of its members, click here.

CFTE announces the launch of the first Regtech online course

ClauseMatch signs its first engagement in Singapore with Ingenia